The Anthropology Bowl is an annual trivia competition where teams of students battle to prove their anthropological knowledge. The first competition was held during the 2013 Annual Meeting.

Students from a single institution can organize a team.  Students are also welcome to come and join up with other “singles” and form a team on the spot. 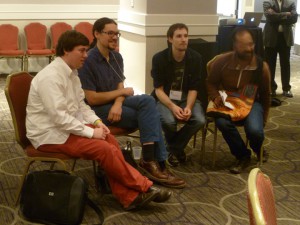 2015 Winners
Sugata Bhattacharya
(please let webmaster know if you’re one of the other winners!)